Back to News
<  What Makes for a Great Kindergarten Experience?
From the Principal  > 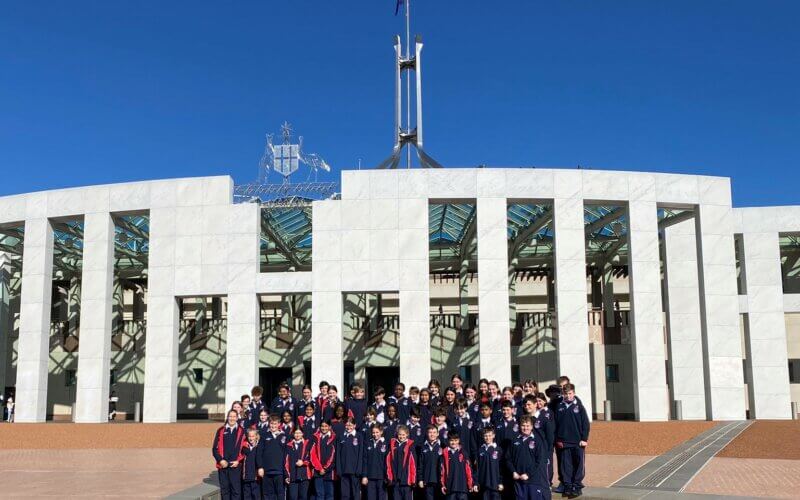 Our Year 7 students have recently undertaken an educational tour of Canberra, our nation’s capital. Students participated in a variety of educational programs that focussed on Australia’s history, culture, heritage and democracy.

The Australian Government recognises the importance of all young Australians being able to visit the national capital as part of their Civics and Citizenship education. To assist families in meeting the cost of the excursion the Australian Government is contributing funding under the Parliament and Civics Education Rebate program towards those costs. The rebate is paid directly to the school upon completion of the excursion.

Arriving at school at 5.30 am in the dark, on a fresh Winter morning may seem unusual for a group of Year 7 students. However, on Wednesday, 15 June there was an air of excitement as they boarded the coach for the airport. After a relatively short flight, they stepped off the plane, energized for their three-day trip to Canberra.

Students arrived at the Electoral Education Office to learn about the electoral process of Preferential Voting, before visiting The National Gallery and The National Portrait Gallery. Students viewed portraits of Australians from different time periods, discussed the different styles and sketched their own artworks. After which, they boarded the coach for some sightseeing around Embassy Drive.

On Thursday morning, at the Australian War Memorial, students viewed a short film about the history of the War Memorial. They participated in the School Wreath Laying Ceremony in the Hall of Memory whereby two students laid a wreath at the foot of the Unknown Solider and another read the Ode. After morning tea, students walked along Anzac Parade to view several Memorials that pay homage to the different wars and the courageous servicemen and women who lost their lives.

They then visited the Museum of Australian Democracy and the ‘The Stacks of Stories’ program at the National Library. After a pizza lunch at the Old Parliament House Senate – Rose Gardens, they visited Geoscience Australia. After a brisk stop at the Mt Ainslie lookout to view Canberra from above, students had an evening of excitement at Questacon (the National Science and Technology Centre), a favourite with students, who engaged with more than 200 interactive scientific displays.

The final day of the trip started at Parliament House, where the students debated a Bill and sat in the galleries of the Senate and House of Representatives. Government House always captures the imagination, and one of our TSAC students was invited to play the Grand Piano in the main reception room. Students had lunch at the Arboretum before their visit to the CSIRO, where they gained a wealth of knowledge of how new developments in the science world are helping to fight serious diseases. Our final venue was the National Capital Exhibition Centre before it was time to board the coach and drive to Canberra Airport.

The trip was truly an enjoyable and rewarding experience for all the students.

Categories: College News
Back to News
<  What Makes for a Great Kindergarten Experience?
From the Principal  >